Egg Harbor City (EHC) is selling its tiny water and sewer system to a corporate utility for an eye-popping $21.8 million, largesse being underwritten by the rest of the corporation’s two million New Jersey customers. What goes around comes around, though. EHC ratepayers will help underwrite the cost of the next acquisition, and the one after that, and the one after that. 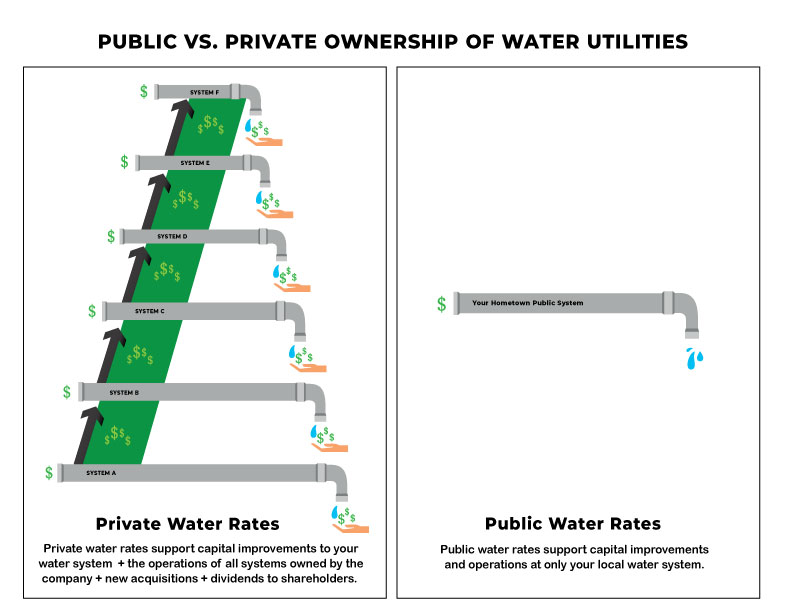 According to a press report, the EHC council voted unanimously on Aug. 13 to relinquish ownership to New Jersey American Water, a subsidiary of the multi-state corporation, American Water Works Company, Inc. (AWK). The people of EHC will join the estimated 15 million people in 46 states who are customers of the corporate family. NJAW is permitted to pass the cost of each and every acquisition along to its customers across the state, even though the acquisitions will not benefit them in any meaningful way.
EHC/NJAW deal is being completed under a misleadingly named law called the “Water Infrastructure Protection Act” (WIPA) passed by a Legislature controlled by Democrats in 2015 and signed by Gov. Chris Christie. The name is misleading because the law does not protect infrastructure nor does it protect ratepayers. At a time when affordability is a bigger issue than ever, WIPA-type deals are especially misguided.
Big Water has successfully lobbied for WIPA-type legislation, so-called “fair market value” (FMV) laws, in many states including Illinois, Pennsylvania, and California. Connecticut and Kentucky have resisted FMV laws thus far. FMV laws encourage “quick fix” transactions (such as the one in EHC) that in the long run are sure to inflate water/sewer rates, a point made in the New Jersey Division of Rate Counsel’s testimony when WIPA was being considered. Under these FMV laws, corporations get to add to their water/sewer holdings for the benefit of their shareholders, but ratepayers foot the bill. AEA opposed WIPA because it permits a system to be sold without a voter referendum, increasing the chance of back-room deals, reducing the public’s voice, and limiting civic dialogue about an important community matter.
AEA sees eye-to-eye with corporate-owned utilities on many issues, such as protecting water supplies and properly maintaining infrastructure. Professionals in government-owned utilities and corporate-owned utilities have worked very hard, together, to keep water and sewer services going during COVID-19. However, AEA opposes tactics often used to promote the corporate-ownership alternative. Promoters of these deals misrepresent the record of government-owned utilities and fail to tell the ratepayers of the true cost impacts of a sale.  They make references to “regionalization” and “economies of scale” to suggest the system being purchased is becoming part of some highly efficient, centralized network, a dubious claim.  NJAW bought the Long Hill Township (Morris County) sewer system and the Haddonfield (Camden County) sewer system –miles away from each other. No economies of scale there.